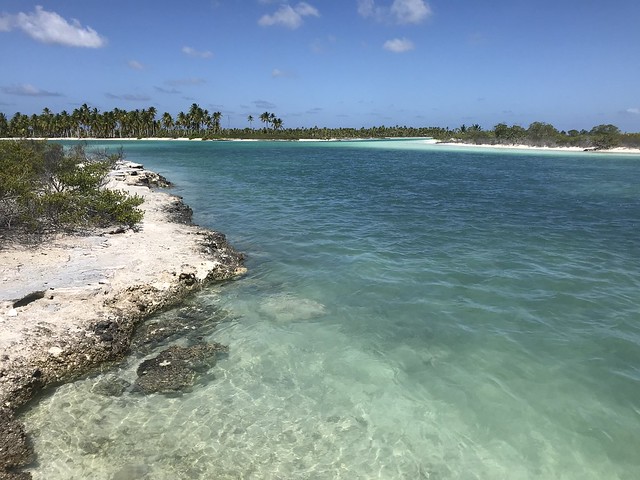 Weather: Sunny and windy (25 mph) which made for a challenge sight casting to bonefish.  Having a powerful double haul and the ability power through the wind and locate your fly was critical in getting hook ups.

Strategies: Walk and wade slowly through the flats locating bonefish and making an accurate cast to them.  My guide carried my 11 weight and was ready for a quick rod switch if GT’s showed up.  I did get shots each day at GT’s, but was unable to connect with a good sized one.

Catch Summary: A handful of nice bones caught today.  The windy conditions prevented accurate casts and I spooked a lot of fished because the fly landed to close to them.

Most Memorable Moment:  I asked my guide to position me strategically in the right spot for GT’s on the incoming tide.  He set me up on a large shelf on 9 mile flat with water dumping in over the top of the flat.  I had shots at 3 large 60-70 pound GT’s working that ledge. I never did connect, but the adrenaline rush was outstanding!

Weather: Overcast with periods of sun.  This made for a challenge with spotting bonefish and other species, but in between the sun breaks we could spot them and it made for some good fishing.

Strategies:  Morning: Bonefish/GT’s walk n’ wade with shots at GT’s if they appear.  I like to focus on GT’s more in the afternoon with the strong incoming tides we had this week.  The GT’s go on the hunt and get more aggressive during this time period of the day.

Flies:  Gotcha’s in size 4/6 – pinks worked well and Christmas Island Specials in pink sizes 4-8,  For spooky fish we found that a size 8 Christmas Island special in orange worked well tied on a black hook and bead chain eyes vs. the lead eyes.  This creates much less of a splash and those spooky bones won’t shy away as much.  We still had to lead them 3-6 feet in front of the direction they were traveling and then get their attention with a strip-strip-strip pattern.  Once they committed and followed then we would stop the fly at times, let it drop in the sand and they would suck it up.

Rods:  For bonefish I tried my Redington 890 Vice.  A really good rod for the money, along with a Rio bonefish flats line.  For a $200 rod, it casts well and has plenty of power for the flats at Christmas Island.  I still like the Sage 890X more, but for a budget rod or as a backup this does the job well. GT’s – Sage 1190 Sage X.

I caught some nice bones today, but the cloudy skies really hampered our ability to see and this reduced our success.    A few shots at GT’s later in the day on the incoming tide, but no solid hook ups.

Most Memorable Moment:  When the clouds would break and sun came out it was like turning on the living room light and suddenly we could spot fish merely feet from us.  This made for quick shots at bones and some good excitement.

Weather: Back to primarily sun with broken clouds occasionally

Strategies:  We headed to Korean Wreck today, which is located on the coastal side of the island and about an hour and half truck ride from The Villages.  This is my second year in a row that I have done the Korean Wreck and it is a nice mix up from fishing the lagoon.  We are fishing right on the ocean here with a reef break out about 200 feet from shore.  It is a really beautiful spot to fish with at times, waist high waves surfing in and fish to follow. Bonefish, Blue Fin Trevally, and Giant Trevally hunt inside the break here.  Our strategy was to look for GT’s surfing the waves in and also get a shot at some of those ocean bonefish.

Catch Summary: Lots of bonefish, close to 20 and some nice Blue Fin Trevally.

Most Memorable Moment:  Ocean bonefish – I got into a school of ocean bones that was incredible.  Once again, in between the cloud breaks we could see the bonefish filtering in through the reef breaks on the incoming tide.  In one spot, the clouds broke and I witnessed the best all out bone bite I have ever experienced.  A school of 30 plus bones moved into within about 30 feet of us and held there for close to an hour.  Every cast was a hook up during that time frame, and there many more missed shots at them also.  I have found that ocean bones vs. lagoon bones are more aggressive and hungry, simply because they don’t get much – if any pressure at all.

Top Fly Used:  Just some sort of shrimp pattern, these ocean bones would eat anything!

Catch Summary:  I caught around a dozen nice bonefish today.  I had numerous shots at some very nice GT’s on the incoming tide right at the end of the day.  They were working this reef in a systematic pattern hunting small reef fish.  They would do circles and keep coming around.  I had six different shots at them, but they would spook easily as most of the shots were within 30 feet – a great distance to get a shot at them – but also very spooky as they would see us or the line would spook them.

Strategies: Yesterday was the full moon, and the bonefish spawn in the Paris flats area approximately 3 days after the full moon.  This is a rough estimate, according to Bea, the head guide at The Villages, sometimes they school up a little before.  So, we decided to see if they were schooling up yet.  We started the morning by getting dropped off at Paris flats and going for a surf walk on the ocean side of Paris flats to see what was happening out there, it was slow so we cut back through the bush to the lagoon side for bones and spent the majority of the day walk and wading for bonefish in Paris flats 1,2 and 3.  Paris flats is broken up into three different flats in order for the guides to identify who is fishing where.   Later in the day, we would pursue GT’s on the incoming tide, at the channel to Christmas Island lagoon.

Flies:  Pretty much the same as the other days, Orange and tan Christmas Island Specials.

Catch Summary:  Excellent spot and stalk bone fishing at Paris flats.  Some small schools off fish starting to show, but mostly groups of 2-4 fish.  They were very aggressive today, but you had to land that fly 4-6 feet away from them or they would spook due to the dead calm conditions.  Pursued GT’s on the incoming channel again today, and I had three shots at some nice ones but no takes.  This was a neat area to fish as there was a lot of incoming tidal current washing over the long bar.   Lots of small black tip sharks were working the area to.

Most Memorable Moment:  I put the stalk on a large bone tailing on Paris, and after numerous casts eventually got him to take.  Not a monster, but the guides estimate was six pounds.  It is amazing what a six pound bonefish can do to an 8 weight rod.  He had me 200 feet into my backing in no time.

Strategies: Head back to Paris flats again today and see if the bones are schooling up.  Fish GT’s later in the day on the surf break outside Paris flats.

Flies:  Same program as the other days.

Catch Summary:  The bones were certainly schooled up today, big time.  Schools were moving around in 50 plus fish groups and it was certainly a hook up every a time one came by.  The bones were larger on average also, which made for some amazing runs.  Lots of fish caught by the whole group today.    I had some great shots at GT’s on the surf breaks today, and missed a hook up on one really nice one.

Most Memorable Moment: Later in the day we fished Smokey Flat on the incoming tide hoping for a GT.  The bonefish were so thick, I spend most of my time catching them as they were pouring in over the top of Smokey up onto the flat.  Once again, a sight fishing opportunity that was very unique.