Steelhead Fishing In Off Color Water // Powerhour Tip of the Week!

Due to the glacial nature of the Klickitat River, the most consistent season to fish for steelhead is mid September through November.  This is due to the fact that when air temperatures are hot, the freezing levels on Mount Adams move way up, and the glacier melt and runoff increases.  That glacial runoff has a high concentration of sediment in it, which has the capacity to render the entire river unfishable.  That being said, there are windows during the summer months when temperatures cool down, and we get a fishable period.  We hit a well timed day and a half period of this in mid July, and it proved worthy with us hooking a few fish on the swing, while seeing very few anglers on the water. 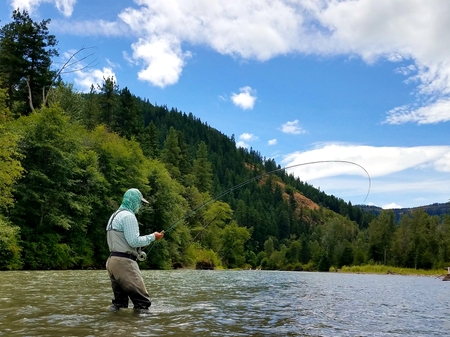 As you can see from these pics, the river wasn’t crystal clear, so the fishing strategy isn’t the same as during our Fall season with high angler pressure and clear water.  I have encountered “off color” water conditions many times over the past 3 decades of steelhead fishing that I’ve done.  While it can be demoralizing to make the trip to any river, only to encounter brown water conditions, especially if it’s a 17+ hour drive to the famed BC steelhead rivers, it isn’t necessarily a wasted trip.  I would even go so far as to say there are some positives that come from it.  First of all, there are likely going to be less anglers competing for water.  During peak season, we hope to be first water in one prime run each day (the first one), so we choose it wisely and hope it produces.  During periods of poor conditions, you may be able to get first water on every run during a day.  Secondly, off color water often times brings in a push of fresh fish, which have a reputation for being “biters”.   And finally, off color water certainly makes fish more approachable.  Not only are they less wary of shadows, noise, etc…, but they also tend to move into water that is easier to present a fly to them.  The same fish that may hold under branches or logs in nearly uncatchable lanes during periods of clear water and bright sun, often move into better swing lanes when the water becomes dirty. 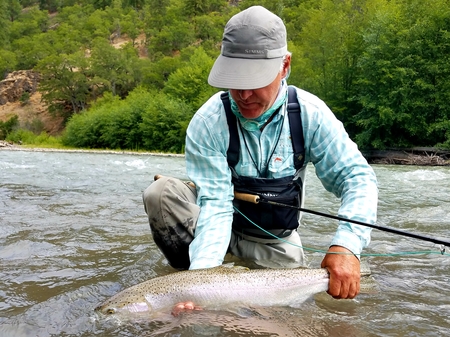 Here are my top 3 pieces of advice I’d give you to find success fishing in off color water conditions:

1. Fish softer, shallower water.  Fish in off color water are less weary and more comfortable holding in tailouts or soft inside corners even in the middle of the day.  Step back from knee deep water to mid calf deep water when swinging, and cast shorter.  There’s no need to hit the far side of a strong bank run, as your fly won’t be deep enough for a fish to see it in that zone.

2. Dark water, Dark fly.  This saying has always served me well.  Black and purple show up better that orange or pink in dirty conditions.  Test that by dropping flies in the water in front of you and see how deep it goes before it disappears – an extra 1” of visibility can make the difference between getting one or not.

3. Step shorter between casts.  Combining the top 2 points here, if a fish can only see 6”, then you need to get a fly within 6” of it’s face.  Casting should be short and efficient, and done with a fly that shows up well.  One step or even a half step between casts may be what it takes not to skip any water.

Gear breakdown for our day on the Klickitat:

Anymore, I don’t pay much attention to forecasts.  If I have a day or a week planned to go steelhead fishing, I’m probably going.  The same fish that you may have caught with perfect conditions are still there, you just need to find them.  As most of you know, the difference between a good day of steelhead fishing and a great day of steelhead fishing is whether you catch one fish or not.  It only takes one swing to cross the nose of an aggressive fish, and that can happen on any cast! 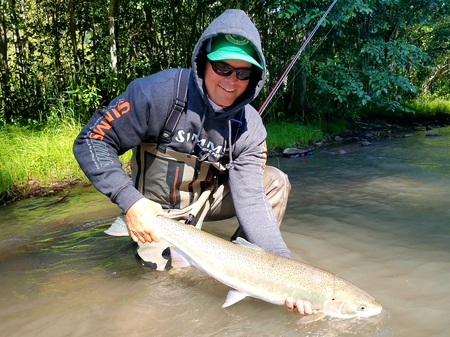