We had 9 of the 12 from our group on the Alaska flight from Seattle. The 3 others all arrived before us, by the time we cleared customs they had met the drivers and were waiting with the vans. We were on the road by 6pm, probably our fastest exit in the 6 years I've been hosting this group. We ate dinner and stayed the night in Tulum, 3rd year of that program. Some years the road from Tulum to the lodge is terrible, up to 4 hours one year, making our arrival at the lodge around midnight.

Arriving at the Lodge:

Our plan was to meet the guides around 8am at Boca Pila, a bridge about 45 minutes out of Tulum, and fish the northern bay. We were told the road was in great shape and the lodge was only an hour past the bride, so we decided to get moving at 6am and drive to the lodge that morning. We were at the lodge by 8am, by 9am we had rods strung and heading to the boats. 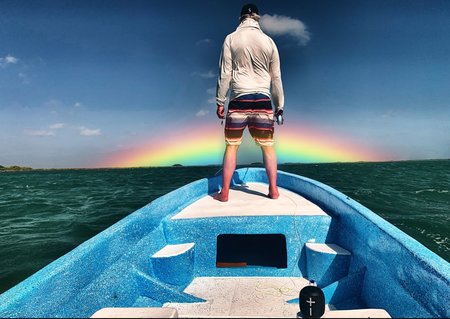 Guide and Anglers: Coy (my dad) and Craig

Pablo has been with Viejo Chac along time, he is mostly retired now and was filling in for his son Edwardo. He was only guiding the one day so it was great to fish with him again. He's always been one of my dad’s favorite guides.

Location Fished:  Did a lot of moving today, looked for permit all day. Only saw a couple, no quality shots.

Gear and Rods Used:  My 3 main rods will be the same almost all week. The 9wt and 10wt are both setup for permit, the 7wt for bonefish.

Had a variety of crabs on the 3 permit rods rigged up. The Casa Blanca is always the first one the guides tie on. We have no “hot fly" of the day. 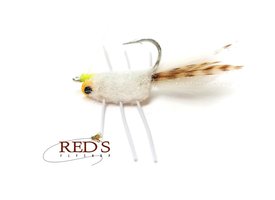 It had been a few years since I've driven all the way to the lodge and rarely seen it in daylight. I'd forgotten about some of the cool views and beaches along the way, with the road in good shape I was able to enjoy the ride. 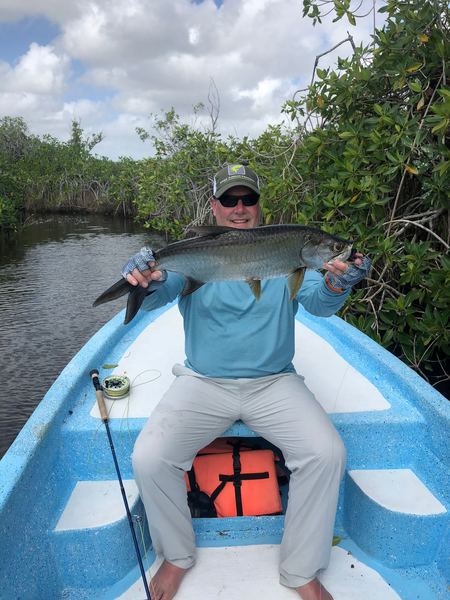 Started in the popular permit grounds around Tres Marias. Finished near the reef  in front of town.

Both permit rods have Rio 10ft 20lb leaders, then about 3-5 feet of Rio 16lb Flouro tippet.

I had 3 fantastic shots at permit this morning. The first 2 were singles, both followed and rejected too close to the boat for any follow up cast. The 3rd shot was a double, good cast, strip..strip…set! Fish on…. and off. Instantly brook off one the set with almost no pressure. Maybe a bad knot, but we think it may have been taken too deep and smashed the line in their crusher “teeth".

Great fly, unfortunately for readers, it was a home tie by another one of our guides at Red’s, Curtis. It's a large, very heavy shrimp. Tan rabbit fur, pink rib body, lots of legs. Most similar to the Avalon shrimp, a fly I’ve thrown many times.

Another longtime Viejo Chac guide William, now fully retired, stopped by after dinner tonight. Willie was the first guide I ever fished with in A-Bay. We told stories and jokes for a few hours. It was great to pick his brain and bounce around ideas. 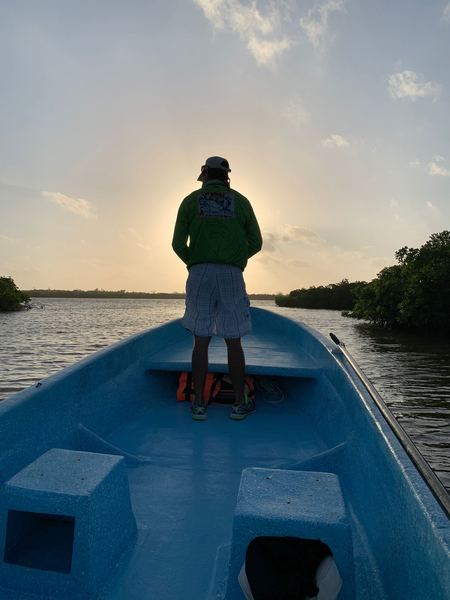 We started out around tres marias, then worked our way into Vigo Grande. Vigo is in the southwest corner of the bay, it’s big enough to be it's own bay. Then fished a few spots for bonefish along the inside edge on our way in.

Morning was pretty nice, a little wind and a few clouds. Afternoon started to get real windy then some dark clouds rolled in. A few big rain clouds came our way, luckily they mostly missed us. We did have to put jackets on a couple times, but only a few minutes each time.

Same rod setups. I was glad to have 2 things today, a good rain jacket and dry bag. I have a Simms Drycreek Bagpack that I pack everything except my boots in. I have an older version of the Simms vapor rain jacket. I also pack rain pants, thankfully I didn't need to use then this year. 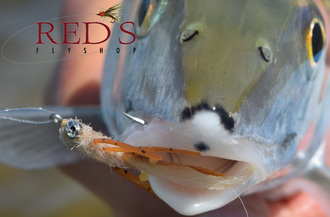 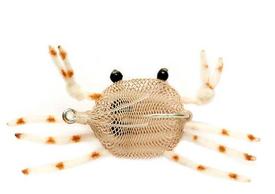 No permit for us, got a few bonefish in the afternoon on the mantis shrimp.

We permit fished all morning, never saw one. About 12:30 we headed for a beach to eat lunch. We had barley gotten our sandwiches out when one of the guides spotted a permit swimming right at the boat. Total fire drill when this stuff happens. By the time we got a rod back out and ready it was within 30 feet. I was able to get a couple cast at it while staying low but no luck. 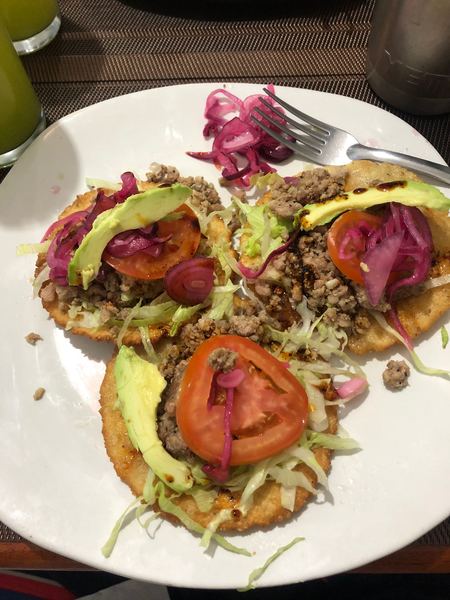 Started permit fishing in the southeast corner of the bay. Switched to bonefish and stayed in that area all day.

The weather the rest of the week got pretty tough for us. We hardly had any breaks in the clouds. The wind started out strong and got stronger. By the afternoon parts of the bay were starting to get muddy from the wind.

Same rods, wished I'd had an 8wt for bonefish because of the wind. I think a heavier line would've helped, a more general purpose line would have more mass upfront compared to the bonefish line. 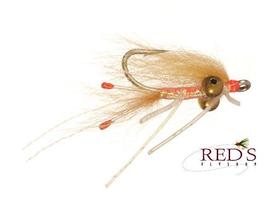 It was a hard day of fishing, hard spot anything. After fighting the wind and clouds for a couple hours, we gave up on the boat and tried on foot. We still didn't see many but I really enjoyed the walks. The only fish we got was one bonefish, but it was one I spotted, hooked and landed on my own. 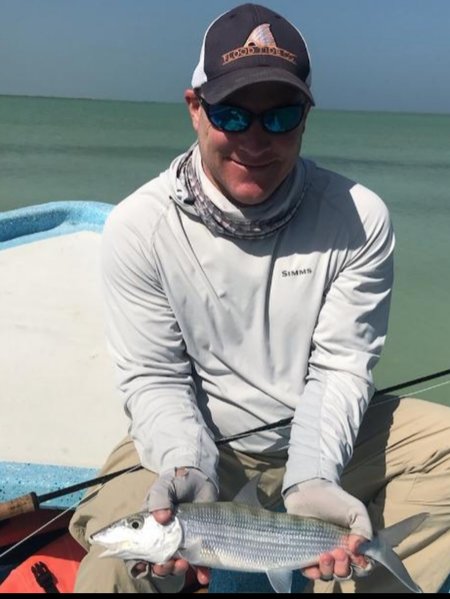 Most of the bay was pretty muddy from the wind, so we went up the north side of the bay. We fished all over and ended up right in front of town.

Super windy, off and on with the clouds. Wind started to let up in the afternoon.

Same 3 rods plus one.

Great setup for small tarpon in channels and Snook.  A Sage PAYLOAD 8'9" 7 Weight would have been a great choice too. 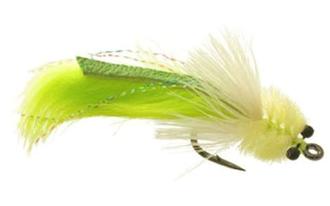 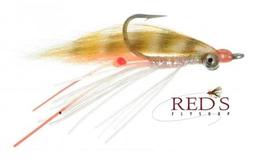 Tough weather but Salty did a great job finding clean water and getting us out of the wind. Bob is a great family friend, he and my dad salmon fish together all summer. This was his 3rd time down there but had been a couple years. It was great to have him back, I'm not sure I know anyone who has more than he does. Salty is the same way, I had fun just watching them. We each caught some bonefish. We did go look for tarpon is some channels but didn't find any. It was Bob's first time going through the mangroves looking for tarpon, it's an adventure just to get there. 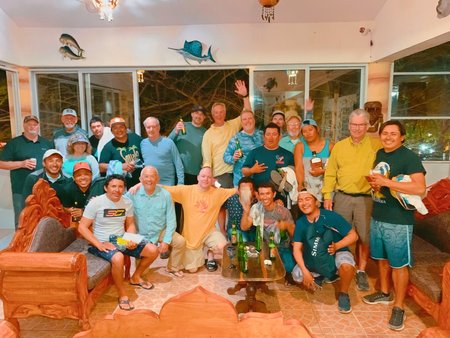 Guide and Anglers:  Antonio and Craig

One guy in the group was having some back trouble this morning, he and his son decided to stay in. Instead of sending a guide home for the day we took advantage of some single angler opportunitys.

Bay was still muddy in places, we fished all over from the west edge to the reef in front of town.

I decided from the start we were permit fishing all day. Because of the clouds we stayed in shallow flats all day giving us more chances to see fins/tails or fish pushing wakes.

Wind was not too bad, 10-15mph range, picked up some in the afternoon.  Clouds everywhere, probably the lowest light I've seen in the 7 trips there. I don't think we ever had a break in clouds all day.

3 main rods again. This time set up all 3 for permit. Heaviest shrimp on the 10wt, crab on 9wt, lighter shrimp on 7wt. Some of the flats we fished were too shallow for normal heavy permit flies. I was also happy I had the lighter lenses for my glasses. My normal blue lenses were too dark, the gold was much better. Everyone should have a lighter lense option, different colors really make a big difference.

We only saw 2 fish today, 1 we didn't see until we were on top of it, the other was really cool. It was late in the day, our last hour of the trip. In a shallow flat we were able to see a wake way off in front heading our way moving fast. The fish was zigzagging its way across the flat, we could tell it was looking for food. Once in range, I put the fly about 10 feet in front and waited a second or two. Once the fish was close, I made a couple strips and we saw the wake go right at it. A second later a big swirl and flash and the fish was on. It ran about 50 feet and came unhooked. Could have been bad luck, maybe I was too soft on the set after breaking one off earlier in the week. Regardless, it was a great way to finish the trip.

We have an option to fish a couple hours the go-home morning, because of the bad weather most decided to sleep in and pack that mooring. A few did fish, but nothing was caught. Some years have had great fishing that morning. With the good road we drove all the way out. We left the lodge around 11am and were at the airport a little after 2pm. Then a long flight home back to the snow.