I just returned from Cuba last week.  The overall weather for our week was good with lots of sun although a few afternoons got very WINDY!  This group was comprised of all repeat anglers (which is a great tribute to the quality and value of this program) except for one newbie who stepped in on short notice for a guy who ruptured his achilles tendon a couple weeks before!

Here's the daily recap of the week:

We overnighted on Georgiana in the Bay of Pigs.  The boat fired up at 5:30 am to begin the 3.5 hour voyage to the mooring location in the fishing grounds.  We woke up and ate a leisurely breakfast en route about 8 am.  By the time we dropped anchor at 10:00 am everyone had rods ready and fishing gear organized.  The guide skiffs loaded us up and off we went on our first day of fishing!  A favorite feature of the Zapata program is that 4 anglers fish as a pair each day 2:1 with guide, and 4 anglers fish solo 1:1 with guide.  The well maintained Dolphin skiffs had no issues this entire week.  A popular feature on these boats is the lean bar on the front, that allows you some support while standing, as well as a handle to stand and absorb shock with your knees while running in rough water.  This more leisurely day of fishing on Day 1 allows for a good shakeout day.  Everyone is going to have some gear tweaks to make, casting rust to brush off, and flat get back into the saltwater fishing mode.  Everyone landed bonefish this day. while the double skiffs went tarpon fishing.  I fished with Mike this day and after checking a few tarpon spots went looking for Permit on the incoming afternoon tide.  We had some prime opportunities including several fish that charged the fly hard, but just didn’t put it in their mouths.  Cachimbo finished the day with us in a protected mangrove bay hoping to find some Permit; however, we found some great tailing Bonefish instead.  I stuck one from the boat, then Mike got out and stalked a group of 3 or 4 on foot.  He quietly snuck into position, made a perfect cast, and FISH ON!  Casting at tailing Bonefish is something that NEVER gets old… 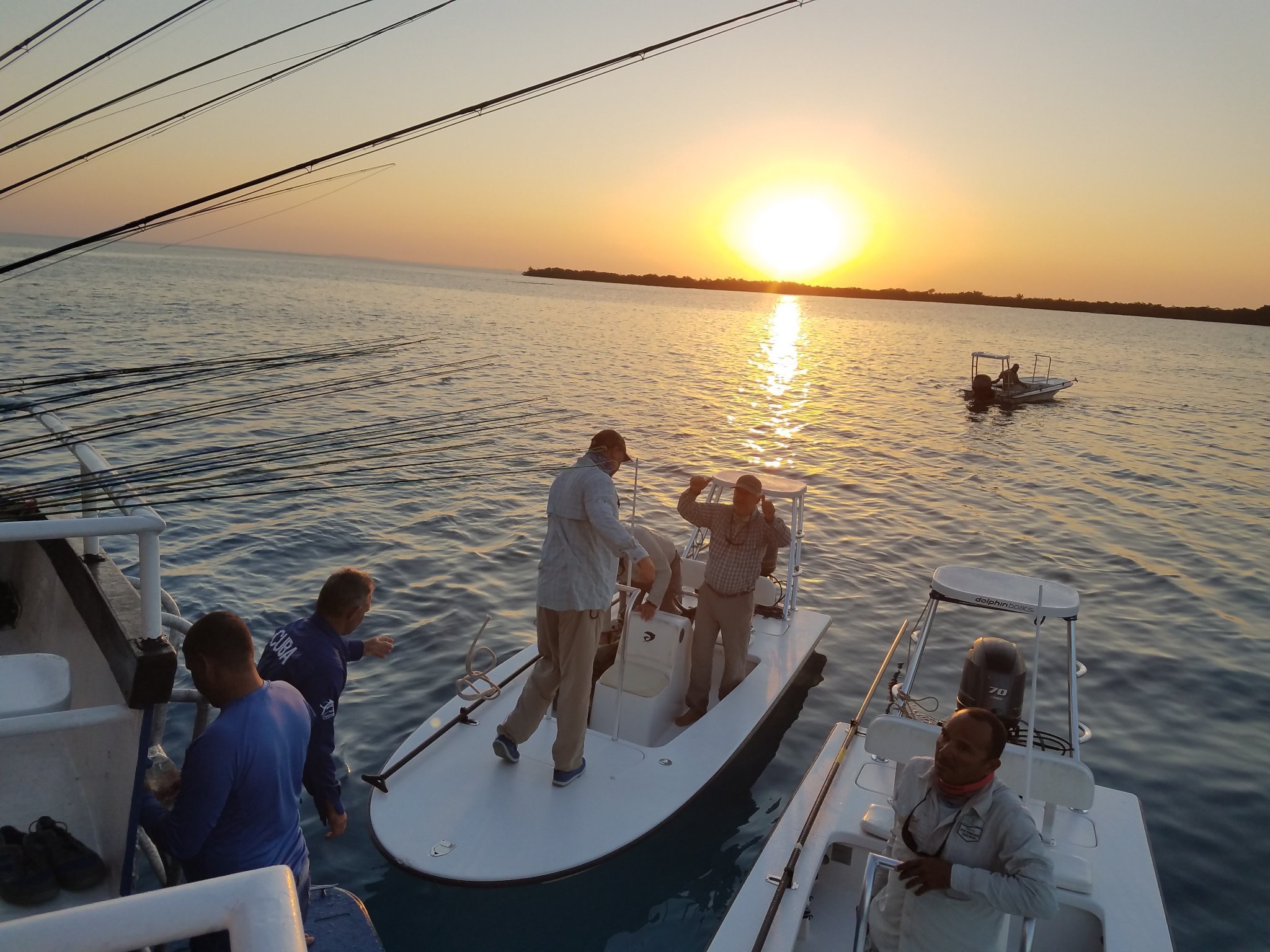 Our weekly program was breakfast at 615 am then fish from 7 am until 5 pm.  Angler Bob fished with guide Espin this day.  They went and stalked Bonefish in the morning on the outgoing and slack tides, then poled for Permit on the incoming tide in the afternoon.  The Bonefish walk was great, as they meandered across a white sand flat with the classic aqua blue drop off on the deep side.  Bonefish were easy to see as they fed across the sand in typical small groups of 2-4.  Bob’s best fly (and only one he threw was a hand tied version of a Christmas Island special with rubber legs (it closely resembles the fly called Ceviche).  He landed several fish in the 5-6 pound range and many in the 3-4.  Once again, we are amazed at how eager the Bonefish in Cuba are to eat!  The Permit are a different story… 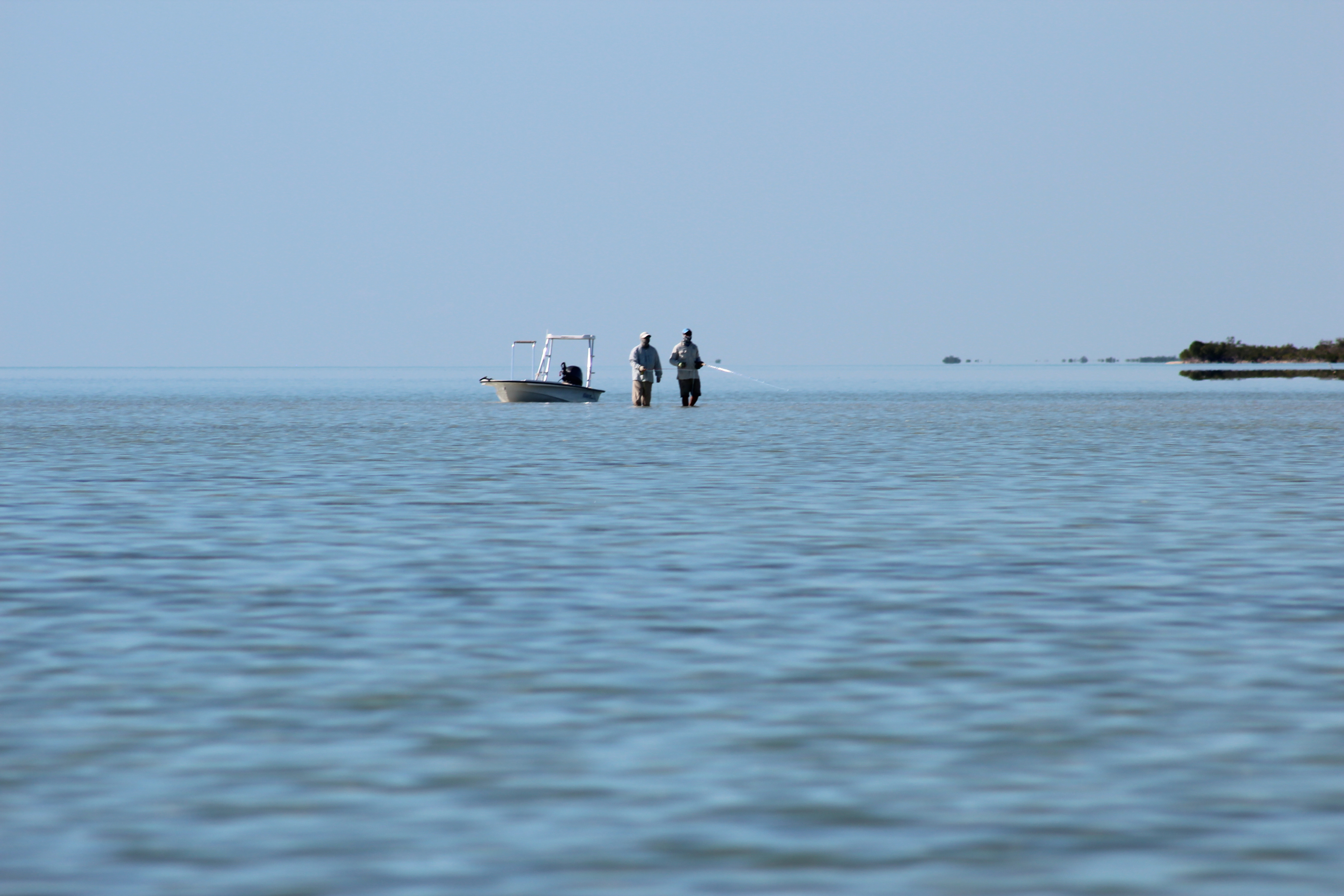 First time Cuba angler (but experienced flats fisherman), Brandon fished with guide Raidel this day.  As was typical of our schedule for the week, they chased Bonefish in the morning on the outgoing and slack tide, then went and looked for Permit in the afternoon on the incoming tide.  Brandon appreciated the Cuba experience as he had the opportunity to throw some long bombs at Bonefish that were easy to see and surprisingly easy to feed, but came back to reality (even in the low pressured Permit waters of Zapata Cuba) as he took numerous shots at the Black Tailed Devils with no success in getting one hooked.  He led further, stripped faster, stripped slower, changed flies,… but Permit are Permit. 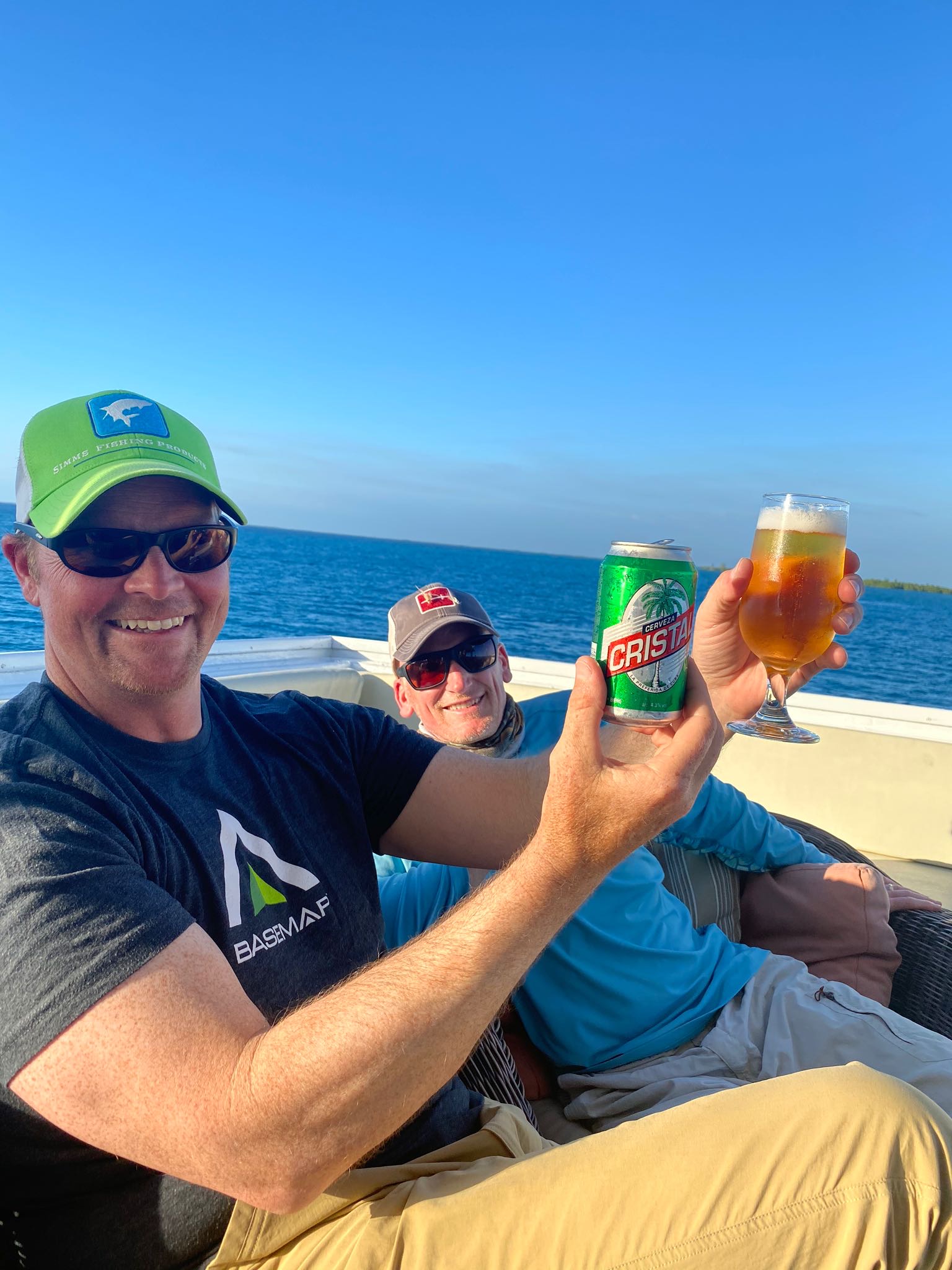 Angler Conrad fished with guide Hector on this day.  After a productive morning of catching Bonefish that included some great shots at tailing permit, they focused in on Permit for the afternoon.  As the light got flat, they spotted a push of nervous water heading their way.  Conrad presented the crab in front of the push, took 2 strips, and FISH ON!!!  After they got done “woo hoo’ing”, and Conrad retrieved about 100 yards of backing to get his fly line back on the reel, Hector commented, “Oh No – it’s a jack”  While slightly disappointed, Conrad always enjoys hooking and fighting nice Jacks like this.  He continued to crank it in, and saw as he brought I in that 4 of it’s nice jack buddies had continued to tag along with it. He gave a good lift, and the fly popped out of its’ mouth.  Before he could even sya “Oh dang!”, another Jack grabbed the fly and off went the line, bemini knot, and several hundred more yards of backing again…  Conrad cranked this one in, and as it started getting close, Hector grabbed another rod in case the pack of jacks was still along for the ride.  Sure enough, they were there, and after one cast and 2 strips Hector had one hooked up too!  That’s jacks for you – 3 of 5 in the same group got hooked, and they kept coming.  You gotta love those guys! 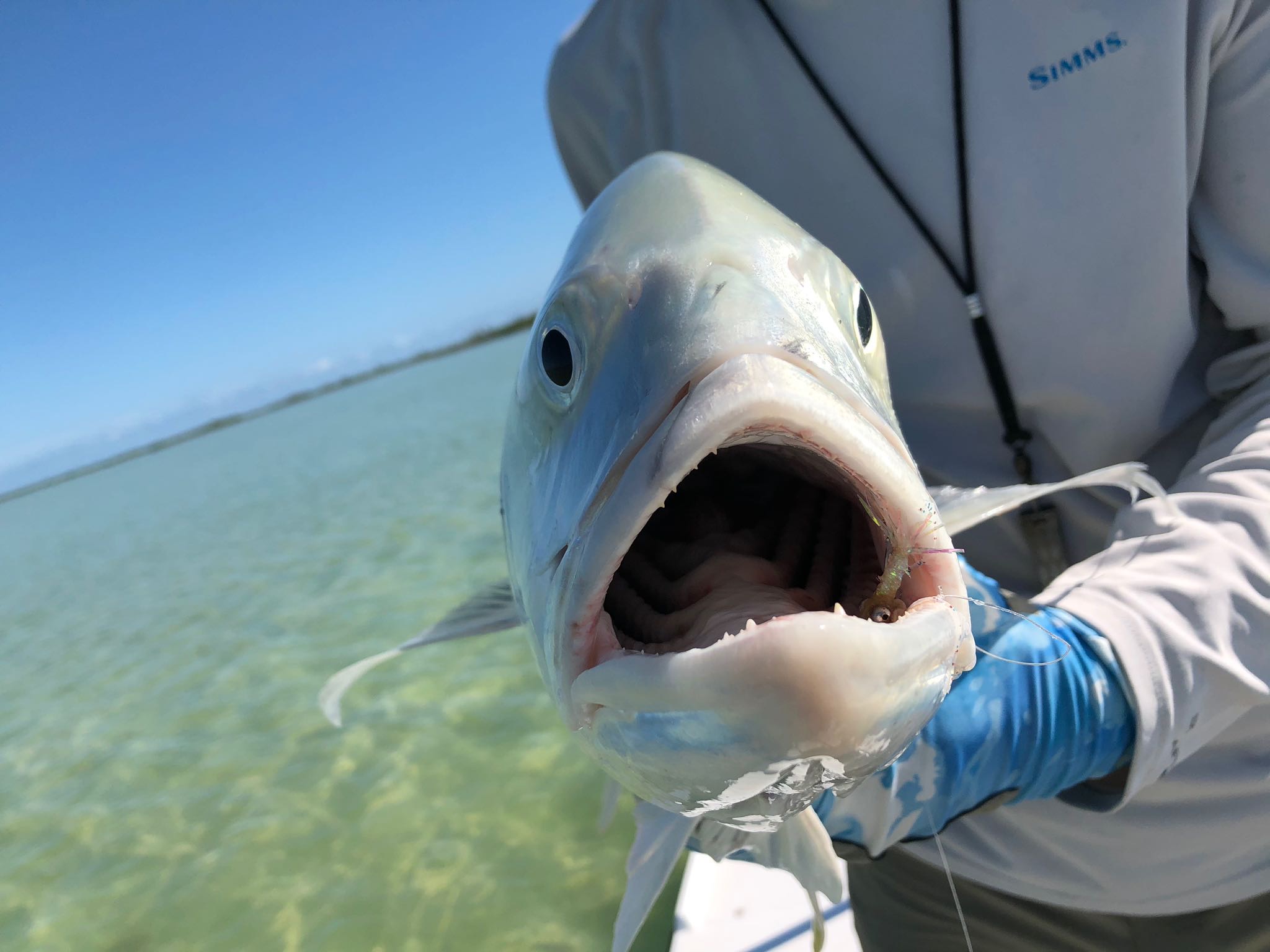 Angler Tony fished with guide Raidel on this day.  Tony actually got a Grand slam on day 4, but I didn’t write his report up because I liked Conrad’s jack story, and Tony had another equally memorable day this day!  Day 4 he got a nice Permit, a good bone, and a nice tarpon to complete the slam.  He did the same this day (all with GREAT fish) and added a 12 pound snook to make it a Super Slam!  While Tony is a great angler, he would be the first to admit, that some days are just meant to be.  You toss a lot of flies at Permit, and sometimes they eat, but usually they don’t.  He found a nice Permit each of these 2 days that liked his Colby’s Casablanca Raghead crab (Olive).  His first fish was by itself, and he saw the nervous water push.  This day, he saw 2 Permit in shallow water, laid the fly between them, strip, strip – a fish swam over, strip, strip, line tight and fish on…  Needless to say a bit of rum got drank on the boat this night in Tony’s honor, as he held the floor and told the story during Happy Hour. 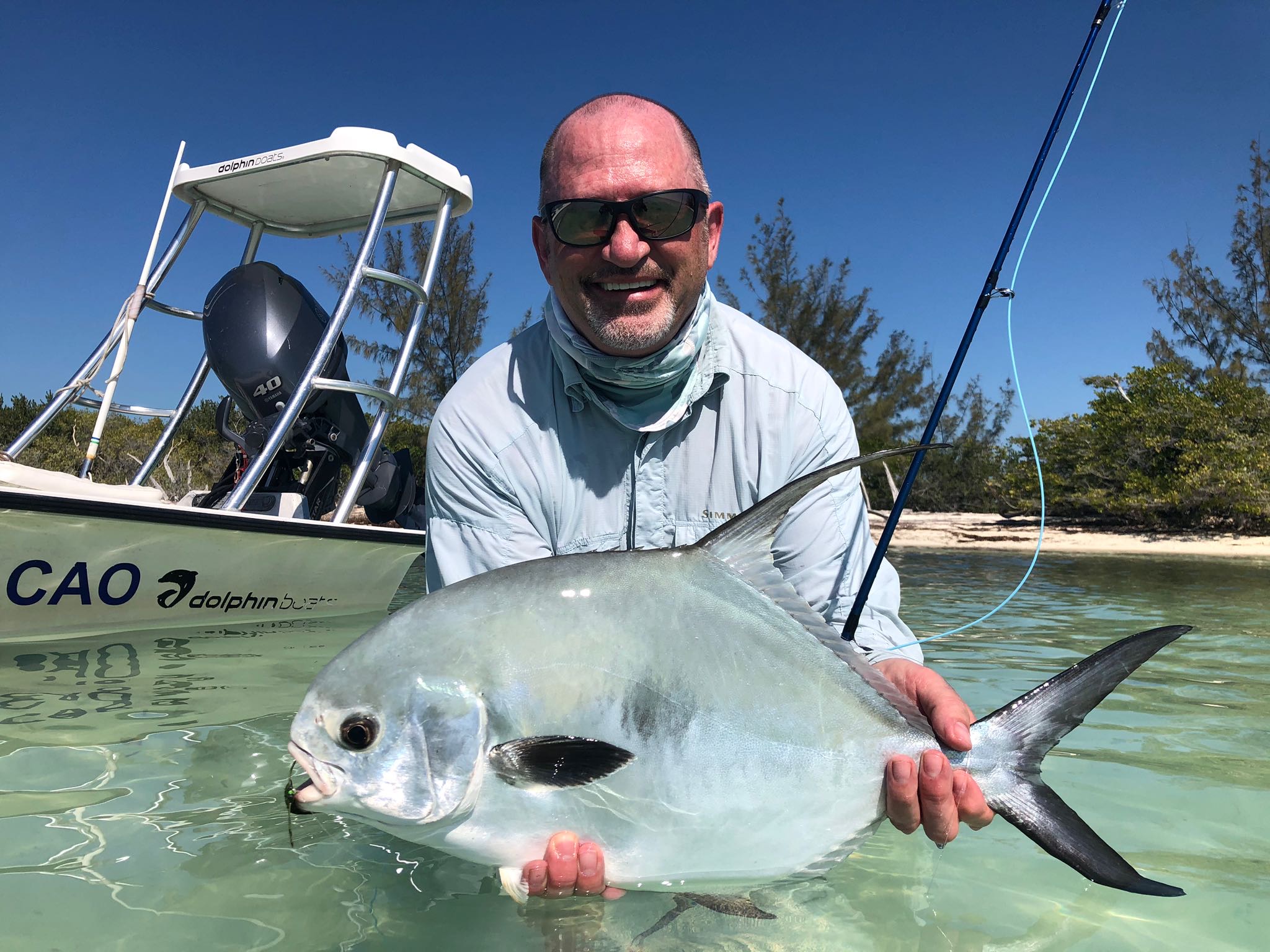 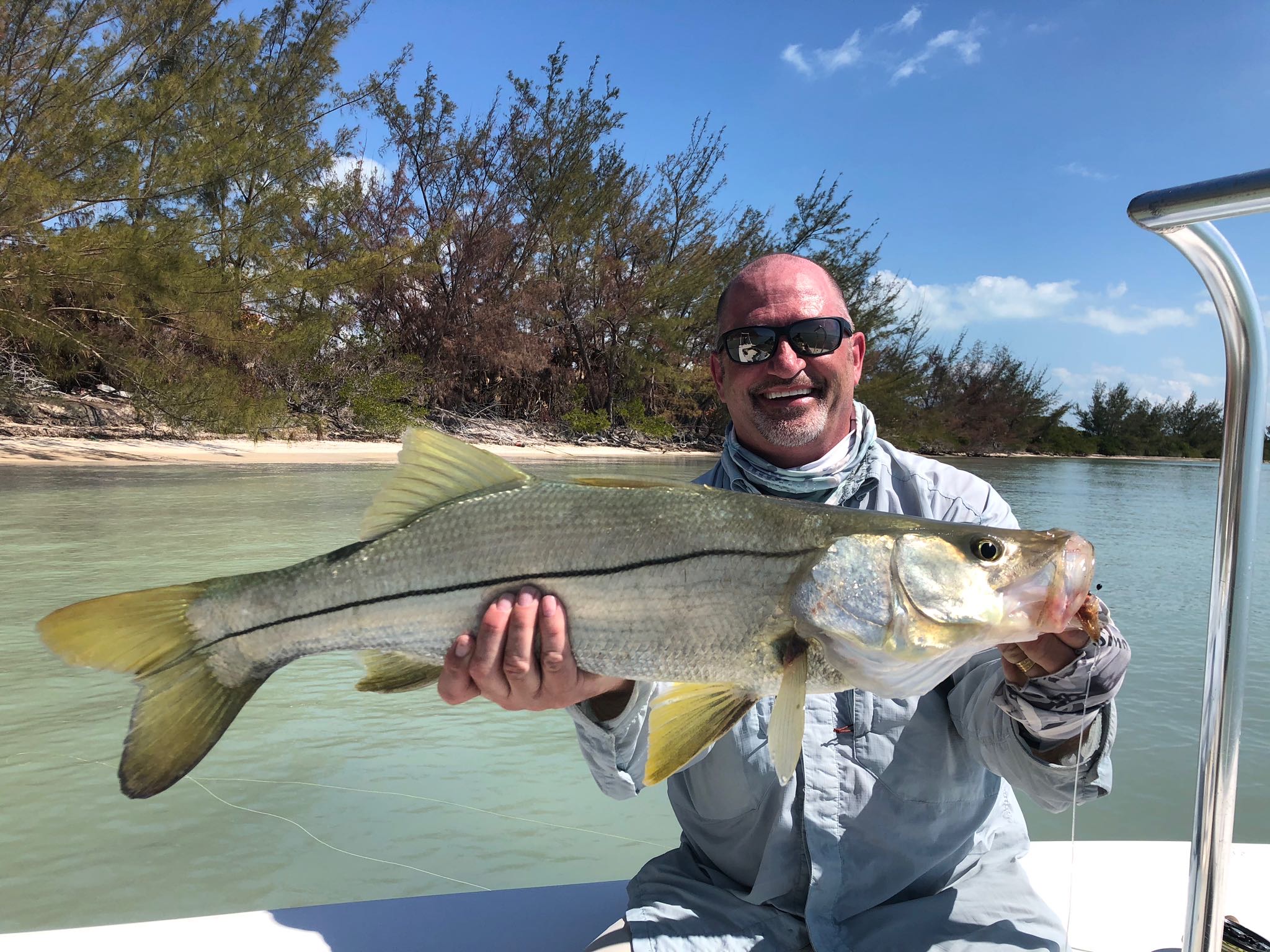 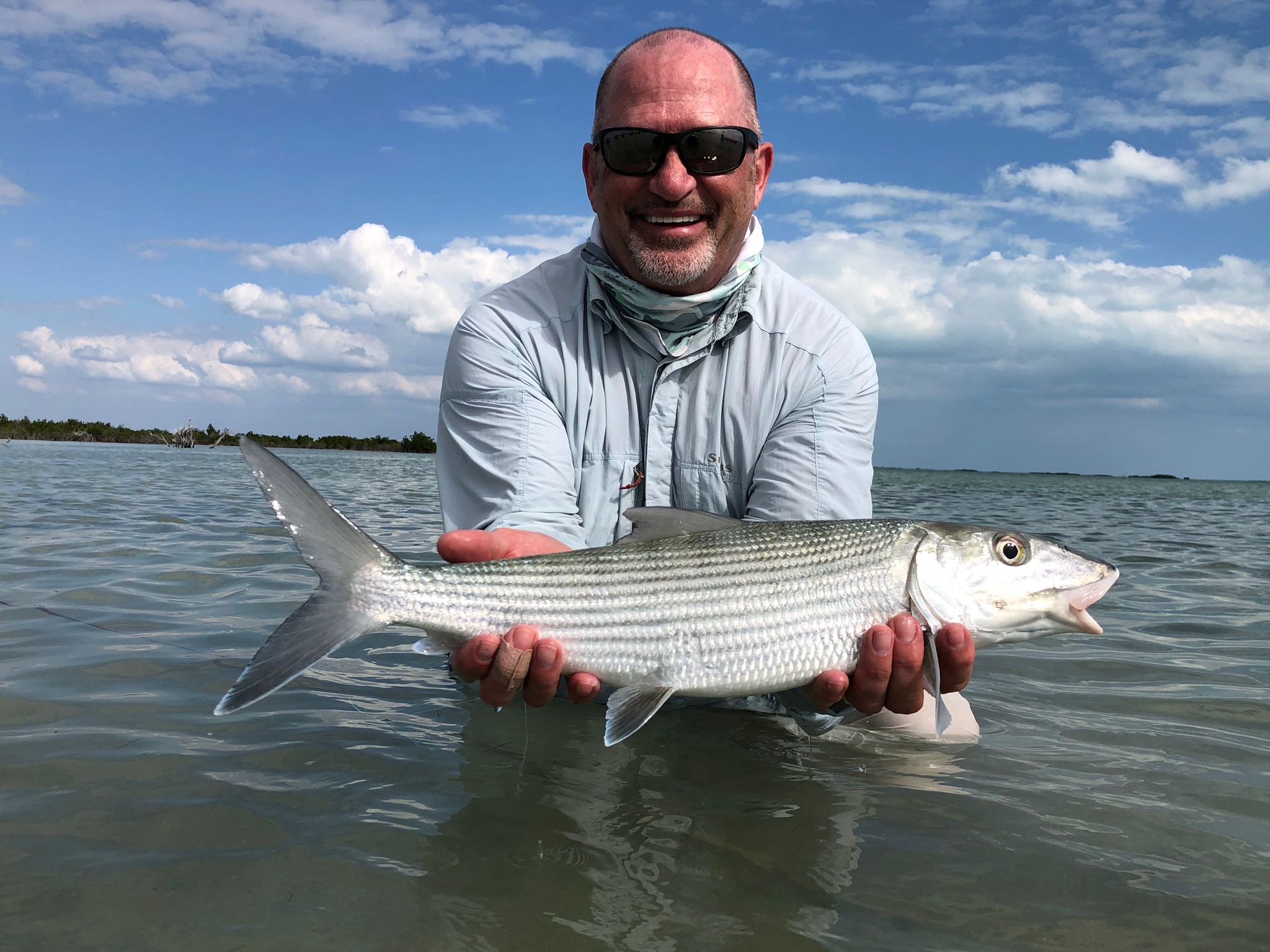 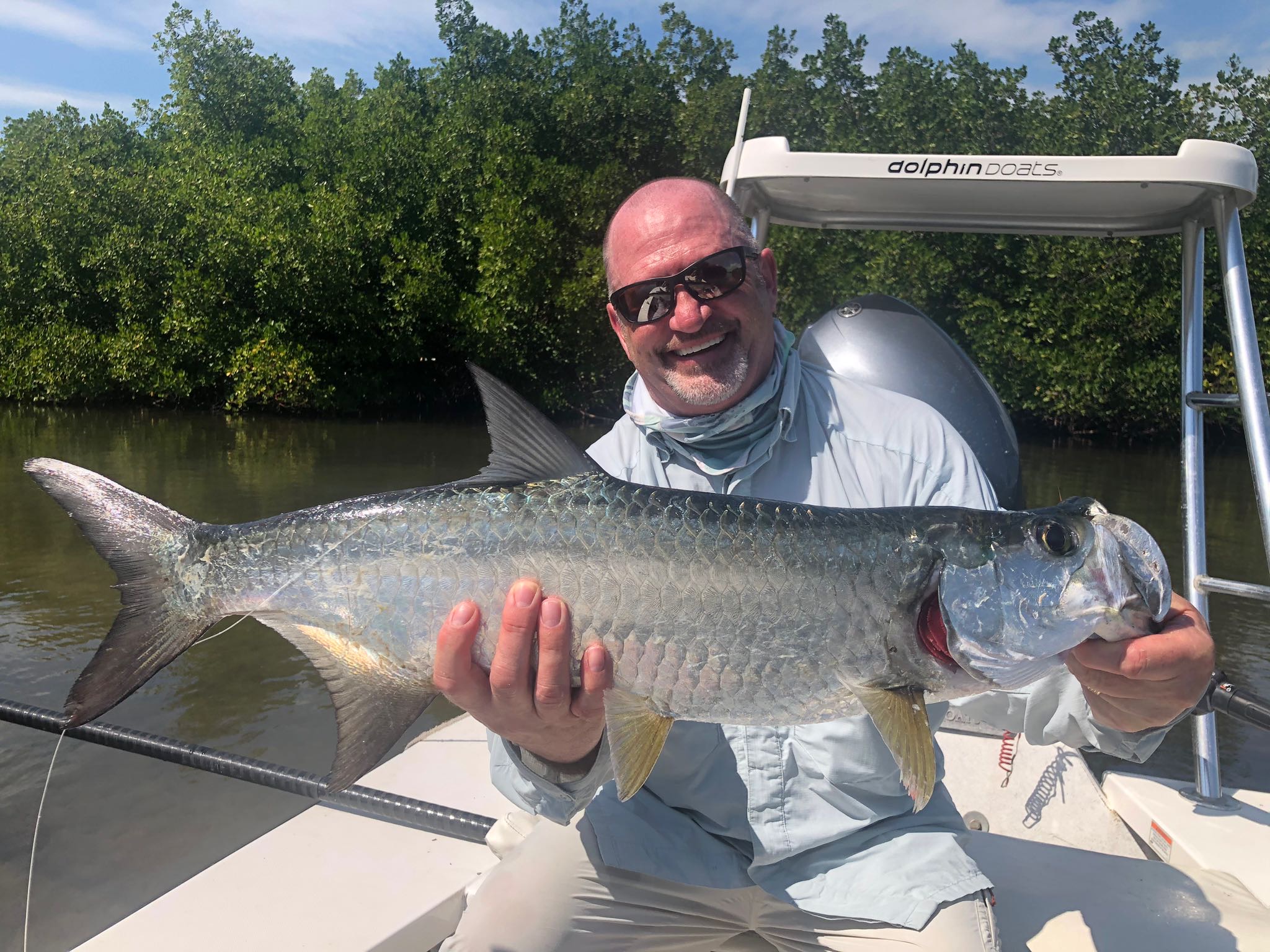 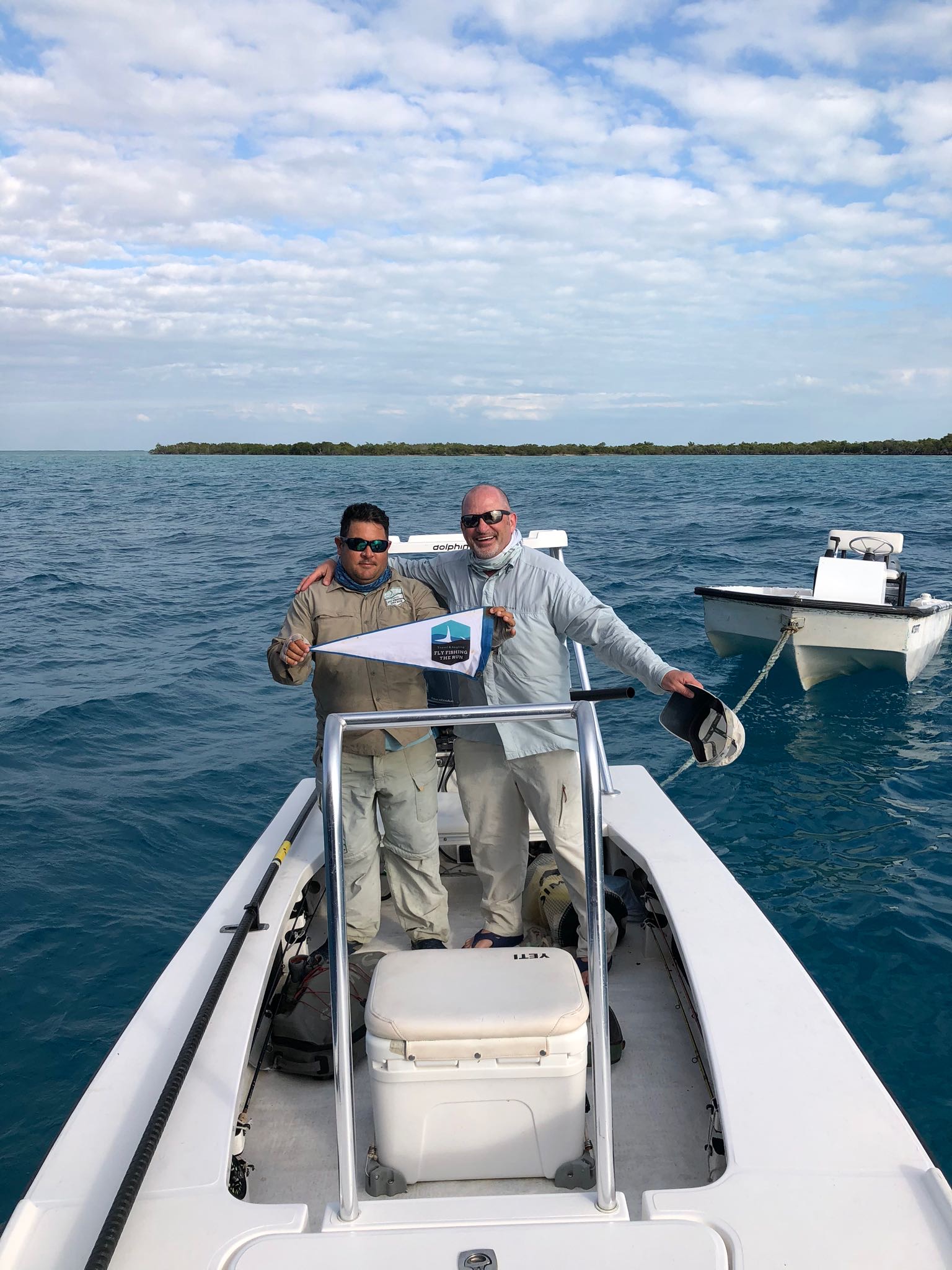 Day 6:  Temperature 86 degrees, strong wind from the E (20+ mph)!
I fished with guide Espin today.  While the tidal swing had now adjusted to an incoming tide until about 11 am (which should have made a great morning Permit opportunity), we didn’t see much for morning Permit at all… We poled and looked and poled and looked and….  I picked off a few Bonefish from the boat as went, but no Permit showed up.  We at lunch then went to check some of the deep water flats during the low tide time frame.  Sure enough, we found and cast at numerous Permit, but the eat just never came.  By then the wind was blowing so hard that poling was tough, casting was tough, seeing fish was tough,…  I suggested we go post up on a small pancake flat for the last half hour of the day and let the fish come to us.  We tried it, and while no Permit showed, I did drink about 4 beers!  What a great week in the Cuba Zapata.  We’ll certainly be back!

Gear Review:
Rods:
G Loomis NRX+:  I threw this rod in the 9 weight for Permit most of the week – this being the second week now that I’ve fished it, I can honestly say I love it.  It performs great in the face of all the conditions you encounter on the flats.  Add the appropriate WF floating line in the Rio Flats Pro or SA Amplitude Grand Slam taper and you will be a happy camper.  Like it’s NRX predecessor, this is a CASTING rod, not a broomstick!  It has a soft enough tip that you can truly feel it flex and load, and enough power in the butt to turn flies over with accuracy, even into the teeth of a stiff breeze.
Sage Payload:  I fished the 8 weight Payload for several days int eh Mangroves and one day on the Bonefish flats.  This rod definitely shines in the tight confines of the mangroves, delivering a baitfish pattern under the canopy with a heavy weight forward fly.  The SA Grand Slam line proved a good fit for that.  I appreciated the 8’9” length when landing them alongside the boat and needing to pull them out form underneath and lift their head.  This rod is a great tool for this job.
Lines:  The Rio Flats pro line is a great line for the general fishing we do in Cuba.  Whether you’re throwing a bait fish sized tarpon fly to a school on the flats, or a barely weighted Bonefish fly at tailing fish in shallow water, it turns over well, flies true, and lands softly.  As with all of the modern WF performance lines, the color coded heads are very handy when measuring casting distance and picking line up off the water.

Flies:  I am narrowing the “Must Have Assortment for Cuba” down to the following: